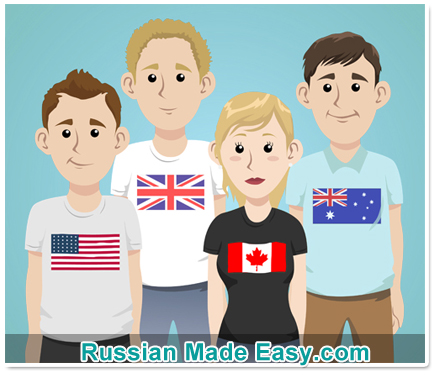 Welcome to this third podcast of Russian Made Easy. Let’s start by reviewing what we learned in the previous podcast.

Imagine you’re at a cafe with your Russian friend. She comes back from the bathroom and sees that the food you both ordered has been served. Say each of the following phrases in Russian…out loud.

[NOTE: As I’ve mentioned in each transcript of this series, I’ve decided to not sound out the Russian words in here using English letters. Please listen to the podcast as you read this transcript. And if you’d like to be able to read Russian — and I promise you, it can be learned in a day or two — I’ll include a link at the bottom of this transcript to my course on reading Russian. Start now and in a few days you’ll be able to read all the Russian in this document.]

Yes, this is your soup.

Is this your borscht?

This is my vodka.

So, how did you do? Did you remember to use the feminine version of my and your — that is, моя and твоя to rhyme with the feminine words like pizza and vodka? If so, you’ve already grasped a fundamental aspect of Russian grammar.

So, what’s on tap for today? Well, I know a lot of my listeners here are also going through my Russian Accelerator course, so I want to address a question I get from you guys. In Unit 1 of that course, we learn how to say: I’m an American. Listen…

Listen again, and repeat after the speaker:

The question I get is from all our non-American members. From Aussies and Brits and Canadians, eh? Not to mention from all our European members. They all ask, “Hey, what about us? How do you say: I’m Australian? I’m British? I’m Danish? and so on.” So, in this episode, we’ll talk about nationalities. We’ll learn to introduce our friends, and we’ll also dispel a common myth about Russian pronunciation. So let’s get to it.

How do you say…

Now here’s the thing. Remember in the first podcast, we learned two different words for student. Right? How would a guy say:

Well, Russian is kinda wishy-washy on this idea of having a male and female version for occupations. What I mean is, some occupations do have a male and female form – like student, teacher, dancer and singer. But many others have only one form, like doctor, engineer and author.

But when it comes to nationalities, Russian is much more consistent and basically has a male and female version for each. So, this phrase:

…is only the way a man would say it. An American woman should say:

So, imagine you’re British and you’re in Kiev with your two American friends, Tony and Jane. Try introducing them to your new Russian-speaking acquaintance. Say…

This is Tony. He is an American.

This is Jane. She is an American.

Let’s try two more. Imagine you’re at the Moscow Movie Festival, and the MC is introducing the stars as they come in. As Russell Crowe enters, the MC says…

Then Nicole Kidman enters and the MC announces…

…that’s an Australian man. And…

He is an Australian.

How about: She is an Australian.

Alright, a quick review before going on. Say..

This is Steve. He is an American.

This is Leyton. He is an Australian.

This is Sally. She is an American.

This is Clara. She is an Australian.

A quick side note: Bear in mind that — just as in English — there are other ways to say these things in Russian. For example, in English I can say, “I’m American.” but I can also say, “I’m an American.” In the first, ‘American’ is an adjective. In the second, it’s a noun. I can also convey the same idea by saying, “I’m from America.”

So what nationality is it? Well, in the movies, James Bond is perhaps the most well know англичанин.

Meanwhile, Queen Elizabeth is certainly the most well-known англичанка.

So, an англичанин is an English man.

And an англичанка is a English woman.

And now our second pair. Again, repeat after the speaker:

We’ll cut right to the chase on this one.

So the word for a Canadian male is….канадец.

And for a Canadian female? канадка

For fun, let’s do a celebrity quiz. I’ll name a famous person, and you say his or her nationality. Ready?

The mayor of Montreal.

I’d like to take a moment now to dispel a huge myth people seem to believe about pronunciation. I get emails and sound files from our members all the time, “I worry that my pronunciation isn’t perfect.” Or, “My native speaking teacher says my Russian accent isn’t perfect yet. She keeps having me practice the same few words over and over. Help!”

Here’s the fact of the matter: Your pronunciation needs to be just good enough so that native speakers understand you. That’s it. End of story. You will never speak Russian without an accent. Never. And you’ll never fool a Russian speaker into thinking you’re a native speaker. Neither will I. But so what?! All that matters is that you speak well enough to be understood. I mean, what does it even MEAN to speak without an accent?

Think about English. What is the correct pronunciation? American? British? Australian? If American, then which American accent? New York? Boston? The Southern drawl? That dry, Chicago accent? If British is the correct accent, then which British version? North London? Cockney? Scottish? Irish? As long as we understand each other, that’s what counts.

And it kills me when native Russian speakers give students of Russian a hard time, and criticize their pronunciation. I have never met a single Russian speaker in the US who doesn’t speak without a brutally thick accent. I’ve met Russians in the U.S. who’ve been living there for thirty years and speak English well, but gimme a break…the instant they open their mouth — with just a single word — it’s immediately obvious they’re Russian. Хэлло Марк. Хау ар ю? But again I say: So what? We understand them. They can function in our society. They can communicate. End of story.

So please…do not obsess about trying to perfect your pronunciation. But do check with a native speaker from time to time to be certain they understand what you’re saying. That’s why we include access to our native speaking Success Coaches with Russian Accelerator. You just need to know that your speech is understandable.

Anyway, that rant is over, let’s learn two more words and then put it all together.

Repeat after the speaker…

Can you figure out what they mean? Well, imagine you’re in Moscow with your two friends, Randy and Christina. You’re in a club and you’re introducing them to a new Russian acquaintance. You gesture to Randy and say,

Then you gesture to Christina.

So, Randy is your друг

And Christina is your подруга.

Both words translate as friend, but друг is for guys and подруга is for girls. Think of it this way. If I tell you that my friend Pat is coming over, you have no idea whether Pat is a man or a woman. But if I tell you in Russian, it’s clear. Listen…

We know Pat is your друг…your male friend.

In this case, we know Pat is a female friend.

By the way, please don’t think of подруга as meaning your “girlfriend”. There’s no romantic associations with the word. It’s simply a friend who is female. And if you’re a guy with a Russian girlfriend, don’t ever call her your подруга because it immediately makes her “just a friend.” We’ll learn the word for “girlfriend” — the kind with romantic overtones — in a future podcast.

(Anyway,) let’s put all this together.

How would you ask in Russian:

Is this your friend?

Answer: Yes. This is my friend John.

He is an American.

Is this your female friend?

Yes. This is my female friend Monica.

This is my friend Leyton. He is an Australian.

This is my friend Nicole. She is an Australian.

My mom is a Canadian.

My father is an Englishman.

This is my friend Charlie. He is a Canadian.

This is my female friend Louisa. She is English.

If you got all these, you really are making awesome progress in Russian.

In the next podcast we’ll learn about greetings and introductions, plus I’ll show you a great tip for maximizing your study time.

As always, I’ve put an “exercise-only” version of this on my site, RussianMadeEasy.com, so be sure to head over there and download that. That’s where you’ll find the transcript as well. And in the meantime, keep on practicing. I’ll see you in the next episode.